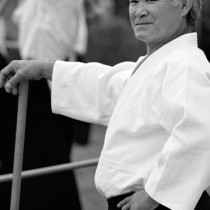 Anyone who thinks that putting more hours into training will necessarily result in greater achievement in Aikido, is thinking like a child. Fundamentally, this materialistic attitude does not lead anywhere but to an insoluble problem. No matter how many hours of training we accumulate, we cannot avoid moving, day by day, closer to the grave. Many students think that through training they can make their bodies responsive and controllable, able to be moved however they wish. I do not deny that a responsive body is an important part of learning. However, it is only part of it, a part relative to a greater factor, which is the development of an introspective attitude in training, with a serious eye to self examination. In many ways, positively or negatively, our body is the product of our consciousness, and, in order to discover what that is, close self examination is required within our training.

It is not helpful to add more and more information, details, power etc., externally and endlessly, to the ‘too much’ that is already there. Recognition of an imbalance, disharmony, or disorder within one’s system, sensed within the body, as well as between the body and consciousness, is a starting point for growth. One might characterize the development of this recognition as a conversation or dialogue which occurs between one’s body and one’s consciousness. As the dialogue develops, awareness becomes clearer, and one begins to perceive the natural power or potential ability which has, until then, been hidden. Instead of adding an external element to the body, changing the body to fit a desire or will, one simply sees what is already within. More importantly, consciousness itself — the way an individual perceives — begins to change as one discovers the “true” body, as opposed to the body that one changes according to will. The vital, unique element that makes Aikido what it is, is that progress in the art moves in proportion to the discovery of that natural power which, together with an organic, dynamic core, already exists within each individual. It is this true body that helps the body function in harmony as a whole.

As one follows the path of Aikido, one progressively, with wonder, and joy, encounters the true self, the hidden, ‘estranged self’, which, with its inexhaustable potential, lies undiscovered by many people who die without knowing that it exists. This passage from Dogen Zenji, founder of Soto Zen, touches upon the subject of my talk this morning in a profound way. “Buddhist practice through the body is more difficult than practice through the mind. Intellectual comprehension in learning through the mind must be united to practice through our body. This unity is called ‘SHINJUTSUNINTAI’, the real body of man. It is the perception of everyday mind, through the phenomenal world. If we harmonize the practice of enlightenment with our body, the entire world will be seen in its true form.” Finally, the discovery of the true body, with its value and beauty, is not to be subject to comparison or to competitive discrimination, but rather stands on its own within each individual. It follows as a natural conclusion that the study of the art of Aikido is and must be non-competitive. Some years back I was fortunate to attend a lecture at Smith College, in Hampshire, Massachusetts, given by a Zen Master from Vietnam. During a question and answer period, a woman stood and asked him what he thought of the meditation system practiced by the Quakers. He answered: “How can you compare the beauty of a cherry flower with that of a rose?”