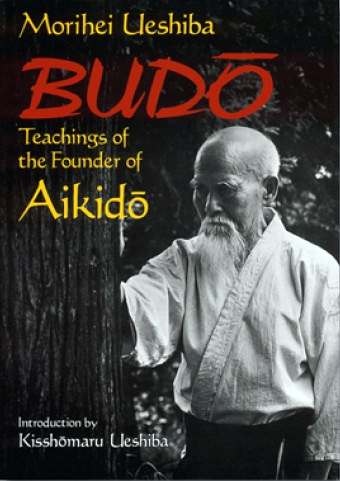 Budo: Teachings of the Founder of Aikido : Ueshiba, Morihei

This martial arts classic is preceded by an introductory biographical essay on Morihei by his son Kisshomaru Ueshiba. This enlightening work recounts the founder’s early life, his inspirational encounter with the religious mystic Onisaburo Deguchi, and the spiritual revelations that led him to develop the art of aikido. The volume concludes with a series of action photographs of the founder demonstrating Aikido techniques, taken at a private dojo in Tokyo in 1936. This section also
includes selected photographs of Morihei in action in 1951. The more than 400 historic photographs shown here provide an unequalled opportunity to observe the lifelong devotion to aikido and the continuity of performance that characterized Morihei’s approach to his art.

These book volumes were written between 1973 – 75 by the late Morihiro Saito Shihan and they are among the most important documents ever written in Aikido. Volumes 1 – 5 covers a wide range of techniques which illustrated the way to achieve Takemusu Aiki, and they describe and illustrate how Ken, Jo and Tai-jutsu integrate so they can become one system – the principle of Aiki. The hardcover editions have been out of print for many years, though reproductions are being made available. The book contains the basic moves for training with sword, empty hands and staff, presenting Aikido as a combined system (Riai), or as Morihiro Saito Shihan´s writes in the foreword of Traditional Aikido volume 1: This book intends to explain the fundamental relationships between the use of ken, jo and taijutsu. It was written with the consideration that it should be used for actual practice.