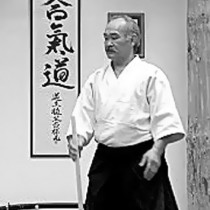 The martial art (budo) is truly a frightening thing. Although I do not know about the attitudes among the majority of people (especially Aikido-related people), it is necessary to know that the martial art is back-to-back with death. However, the potential death is in an inevitable balance of tension with the instinctive desire to survive. This fact bears itself heavily upon the seeker’s mind and body in the training process, while vividly emphasizing the existential dignity and respect of the lives of the self and others. If we were to find the unchangeable ethic 1n our Japanese budo, its source should be found in the relative balance of tension between life and death and between the self and others.

Aikido is a new way of developing personhood beyond the traditional and conventional martial arts, and it is a combined result of the utmost efforts and natural predispositions of a great personality, Morihei Ueshiba. However, this does not mean that Aikido denies the various thoughts found in the traditional Japanese budo. In other words, the transcendence of Aikido from the traditional martial arts as a new way of personal development does not mean it ceases to be a martial art, just as it is impossible for humans to stop being human or conversely to assert that their existence bas been non-human. Rather, it may be more appropriate to believe that the Founder’s own internal experience, that is, his spiritual light, was emitted and filtered through the Japanese budo (the rare product of the human race) upon its fundamental and essential existence. I believe that the answer to this process is the Founder’s “take-musu-aiki” (truthful aiki).

Before Aikido was developed, the concept of aiki had already been in existence in Japanese budo since the ancient times. Likewise, the state that the Founder reached is not exclusively unique to him in the history of Japanese budo. The Founder himself never said that Aikido is not a martial art although he used to say that Aikido is a true budo. I therefore disagree with the view that Aikido is a completely unique and new discipline while ignoring the position of Aikido in the Japanese martial art history and its relative relations with other martial arts.

The fundamental meaning of the impossibility of humans quitting being human is derived from the fact that humans cannot become free from the restriction of life and death or from various sufferings (birth, aging, ailments and death). The uniqueness of Aikido as a way of personal development lies in the departure from the self-limiting formalization and win-lose conceptualization found in the traditional Japanese budo, toward the original, fundamental, and permanent place of existence. I find the reason for the Founder’s calling Aikido the real budo in this fact.

There are cheapening trends not only to be overly ideological but also to be commercialized. I feel the necessity to give warnings here. I consider this to be double deterioration. One side of it is that Aikido, as a Japanese martial technical system, becomes more abstract as time progresses. The other side is that Aikido becomes more financially pragmatic in its existence.

In addition to the above, the dojo as the place for personal training is facing increasing amounts of unnecessary organizational and political pressures. This present state sheds a dark shadow on the development of Aikido which relies on the existence and development of young practitioners with free and unrestricted individualities.

These two elements, coexisting with the hedonism that is pervasive in the present society, need to be overcome daily by the seekers of the true Way.